The Joker is a minifigure for the DC Universe theme.

The Joker has a green hairpiece, white hands, and printings which give him his appearance in some DC Universe comic books.

Joker's hair piece is Dark Green, swept back, and has a widow's peak. The torso and hands are also different. The hands are white just like his face, which has an evil smile with a mouth full of Yellowing teeth, grey lines to give his face more shape. Joker's torso has his signature purple jacket and green bow tie, but his vest is now green with a checkered print, yellow buttons, and the shirt underneath his vest is yellow. His torso also shows an acid-spitting flower.

On his printed pattern of the back of his jacket, with yellow buttons and his green vest poking out. One side of Joker's head has his mouth open wide with his yellow teeth showing. The other side has his mouth closed with it tilted slightly.

Jack Napier (The Red Hood) had planned out a heist in the Gotham Chemical Plant, but when Batman came to apprehend him and his cronies, he tried to escape the Dark Knight on his own. But he fell into a vat of chemicals, which turned his hair green, bleached his skin white, and stained his lips red and stretched them out into an everlasting smile; it gave him the appearance of a crazed clown. Driven insane by this reflection, the unknown crook then named himself the Joker and would become one of Gotham's most sadistic and twisted crime bosses. He may be insane but he is also a genius, having knowledge of chemistry, physics, and engineering; he invents gag-based gadgetry whilst concocting criminal schemes. The Joker also cheats death frequently, having been thought killed several times only to come back and wreak havoc once more. He has many minions serving under him, most notably his self-proclaimed lover Harley Quinn who herself was once his psychiatrist. The Joker is a mass murderer and has been known to kill many people, even his own evil henchmen.

The Joker sneaking up behind Batman in LEGO Batman 2: DC Super Heroes. 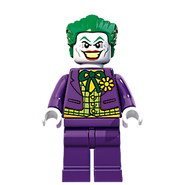 The Joker in the Super Heroes Animated Short. 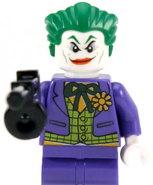 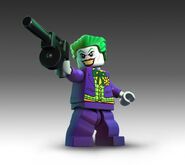