Loki is a minifigure for the Marvel theme.

After slaying the King of the Frost giants Laufey in battle, Odin found a small Asgardian-sized child hidden within the primary stronghold of the Frost Giants. The child was Loki, and Laufey kept him hidden from his people, ashamed of his son's small size. Odin took the boy because he showed strength when Odin slew his father in combat and raised him as his son alongside his biological son Thor.

Throughout their childhood and into adolescence, Loki was resentful of the differences in which he and Thor were treated by the citizens of Asgard. The Asgardians valued great strength, tenacity, and bravery in battle above all things, and Loki was clearly inferior to his foster brother Thor in these areas. What he lacked in size and strength, however, he made up for in power and skill, particularly as a sorcerer. As Loki grew to adulthood, his natural talent for causing mischief would make itself manifest and earned him a nickname as the "God of Lies and Mischief"; his mischievousness eventually became malice as his hunger for power and revenge grew stronger. Several times he tried to use tricks to get rid of Thor, like telling him to guard a hole in the wall he had made. In time, his reputation grew from being a playful and mischievous trickster to the "God of Evil". Over the centuries, Loki attempted on many occasions to seize rulership of Asgard and to destroy Thor. He even helped the Storm giant Ghan to escape Thor planning to get a debt from him later, and aided other enemies of Asgard, planning to take over. Odin, who had grown weary of Loki's mischief, magically imprisoned him within a tree until someone would shed a tear for him. Loki eventually freed himself by causing a leaf to strike Heimdall, the guardian of Bifrost, in the eye, which made him shed a tear. Loki compiled an extensive criminal record in Asgard, and was frequently exiled. He met the Sorceror Eldred, who taught him black magic. He repaid Eldred by later giving him to the Fire demon Surtur. 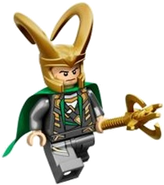