Deadpool is a minifigure for the Marvel theme.

He was once known as Wade Wilson, He was a ruthless soldier in the service of the cruel William Stryker. Soon after being saved from death he realized what he was doing and became friends with Wolverine and was good, though alongside Wolverine, still wants revenge on Stryker for past offences.

Deadpool is set to appear in Lego Marvel Superheroes with his katanas and gun. 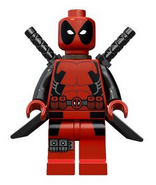