Captain America is a minifigure for the Marvel theme.

In 1942, Steve Rogers was deemed physically unfit to enlist in the U.S. Army and fight the Nazis in World War II. Volunteering instead for Project: Rebirth, a secret military operation, he is physically transformed into a super-soldier dubbed Captain America. He along with his partner and friend Bucky Barnes, went on adventures fighting HYDRA, a Nazi organization created by Johann Schmidt, also known as the Red Skull. While trying to prevent the detonation of a bomb on a plane, the bomb detonated, seemingly killing Bucky, and hurtling Captain America to the icy waters of the Arctic. Captain America was frozen in the Arctic for almost 70 years but survives due to the super soldier serum and is discovered by S.H.I.E.L.D scientists. Meeting S.H.I.E.L.D director Nick Fury, Captain America became the leader of the superhero team The Avengers, which also consists of Iron Man, Hulk, Thor, Black Widow, and Hawkeye. 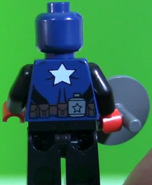 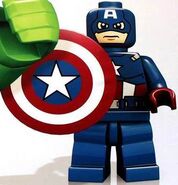 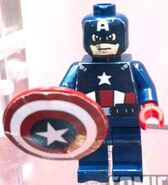 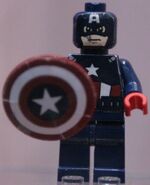