6858 Catwoman Catcycle City Chase is a set for the DC Universe theme. It includes Batman with a jet-pack, Catwoman with a a purple motorcycle, a traffic light, and newspaper stands with boxes. Unlike the other Super Heroes sets, this set does not include a comic book.

The catcycle is essentially a purple and black motorcycle, and it has a transparent headlight in front of a black decoration. There are two black rear view mirrors on the side. On the back is a black piece attached to the motorcycle to give the look of a cat-tail. There is a clip on the side to attach Catwoman's whip.

Batman's jetpack is dark blue and replaces the cape he has in other sets. It has light grey pieces and a transparent light blue stud attached to the back.

The street corner is a few light and dark grey plates attached to give the appearance of a thin sidewalk at a corner. On the corner is a black post which extends upward until a yellow stoplight is attached via a wrench. There is also a blue bin on the corner. Three brown boxes, two newspapers, and a batarang are also included, but not attached to any submodel.

This set is based on no specific scene from the Batman franchise, but according to the set description (which has been translated from French), it seems as though Catwoman steals a large diamond, at which Batman tries to stop here by throwing a batarang at the stop-light, causing it to fall on Catwoman's Motorcycle. The idea of the set could be inspired from the simple idea that Catwoman is a jewel thief. 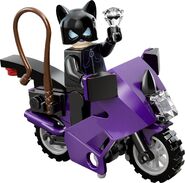