Lego Super Heroes Wiki
Register
Don't have an account?
Sign In
Advertisement
in: Articles that use descriptions from LEGO.com, Pages that link to shop.lego.com, Sets released in 2012,
and 3 more

4527 The Joker is a set for the Ultrabuild, DC Universe theme.

The Joker is made of an assortment of various different colours, such as Purple, Orange, Metallic Dark Grey, and Green for his armour, Black for most of his joint pieces, and White on certain other parts.

His chestplate is coloured green, and has half-purple, half-orange lightning bolt piece attached to it, to represent a tie. It also has a sticker depicting a red flower with a yellow centre printed on it. His upper arms are coloured metallic dark grey with and both have a small orange spike attached the front. Joker's lower arm is purple and without spikes. His hands are coloured white. Joker's legs mirror his arms with metallic dark grey on the upper part and purple on the lower, but they are without spikes and end at orange feet. On his shoulders, Joker has two purple flaps facing upwards with two orange spikes. There are two spikes attached to Joker's back which are long, curved, and purple to represent coat tails. Joker's head is thin and white with black eyes and eyebrows. His mouth is white with a large, red lower lip. Joker's hair juts out to the left, right, and behind. His hair has a dorsel shape in the center of the top. 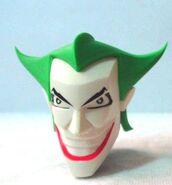 Back of the box.

The mini comic found in the front of the instructions.